A favorite phrase of mine is that “proper prior planning prevents piss-poor performance.” This is a lesson that I should have remembered during the course of my foray at the Hyannis Half-Marathon this past weekend. As you can imagine by both the title of this entry and this opening, I did not. There’s a reason Kelly likes to call me Icarus.

Coach Liz has been doing a good job of getting me somewhat consistent at getting out the door. Being able to get some training in the middle of the day at work has been an absolute life-saver, especially with trying to manage all of our schedules together. After some less than stellar results at a 5K in December, I had a fantastic run out at the People’s Forest (don’t call it a race!) run in Barkhamsted.

I naturally followed my standard protocol of three beers for a PR, consuming three throughout the course of a relatively low-key Saturday. We went to bed pretty early, and got up very early. Pre-race breakfast of coffee, cinnamon raisin bagel, and some snacks, and we were on our way to the Cape.

The drive took no time at all (Kelly and I are both quick drivers), and we were at the race start with about an hour to spare. Bib pick-up was smooth, and it was time to get myself geared up for the day.

With temperatures in the upper 30s and winds forecasted to gust towards 30 MPH, I opted for my Oiselle singlet, arm-warmers, and tights. Swiftwick socks paired up with my Saucony Freedom ISOs (I had hemmed and hawed over shoes for a bit in the days leading up, opting for the pair I’d been putting the most regular mileage on). And naturally, the backwards hat.

It was quite the look. 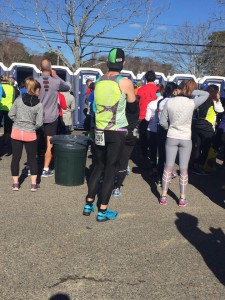 As for the plan – the one I had written to Coach went something like this:

Pacing/Nutrition – go like hell and pray for a swift and merciful death.

Real idea – head out at around 7:40 pace, look to descend each 5K or so until praying for death the last 3.1 miles. Depends on how the wind looks, but figure this is a better idea than just trying to hold on.

Pop a Skratch chew every mile. Keeps me running well. Water/Gatorade as necessary.

This will come into play later.

I managed to hit the port-o-johns twice, which cut my warm-up time short. A quick sprint for good luck kisses from Kelly and Ivy and away we were to the start.

I lined up right between the 7:00 and 8:00/mi pacing signs, which I felt would yield a group looking to run about 7:30s out of the gate. I noticed a guy to my left wearing some Qt2 Systems gear, heard him talking, and decided he was good people. We got the 30 seconds to go, and unfortunately the start was just a quiet siren on a bullhorn (perhaps a foghorn would’ve been fitting for the Cape?).

It took a few seconds for us to shake our way out of the gate, and we were off.

Myself and Mr. QT2 started to settle in and realized we were running the same pace. After chatting for a minute, we realized that we’d be good company for one another – he was looking to run 3:10-3:20 for the marathon, which put him right in line for my anticipated 1:35-1:40 range.

We both realized that mile 1 was WAY too fast – 6:44. Whoops. We just kept chatting away, making it to the first aid station (Gatorade Lemon-Lime…would it be too much for Gatorade to do orange Endurance formula as an option?), and getting going quickly again. Mile 2 goes by in 7:05 – again fast.

You can see where this is going. Mile 3 is in 6:52. I stop looking at my watch because I fear that I’m just being stupid and need to run off of feel. Somewhere around here I lose Mr. QT2 behind me. With running off of feel, Mile 4 is 7:09, Mile 5 in 7:19. I contemplate just taking the 10K route home because I know this is going to get interesting at some point and decide “ah, to hell with it, let’s just give it a roll of the dice.”

I receive my first #BroBird comment along this stretch, being informed that “you’ll be the hairiest person in that kit all day.” Well, duh. My beard is quite excellent, thank you. It kept me warm, at least. The comment spurs me to a 7:13 mile 6.

What did not help is that from mile 6 to 8, we entered the headwind zone along the beach. And do I mean headwind – miles 7 and 8 are the first ones where I actually slow down to something reasonable: 7:28 and 7:33. Part of this, though, is because literally everyone was hiding in the wind behind me. I mean, being tall has its advantages…this was not one of those days for advantages.

I also realized that due to the wind, I was hurting more on the hydration front than originally anticipated. This also meant that I wasn’t taking in nearly the same amount of calories that I probably needed to, either. New game plan: let’s make sure we actually get some fluid in at the aid stations. I slowed down to make sure I was able to get at least two cups at the next few stations and start getting some of my nutrition in.

If you’ve gotten this far, you already know where this is going.

Mile 11 is in 7:37 and I feel about as nimble as a plane that size. I’m done. I walk the next aid station to take as many chews in as I can, but they’ve bound themselves together in my mouth. I spit them all out. My running, meanwhile, maintains pace. Mile 12 goes by in 8:08.

I try to push the gas pedal and I just about hit the ground. Well, time to open the second package of chews. I ate literally all of them. Took a cup of water, and got running again. Run pace came back after a minute (surprise – sugar is good when you’re bonking!). I finish it off in 1:37:50 having lost about a minute and a half over the last two miles. 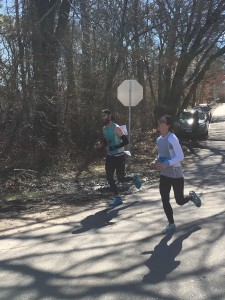 Final turn. Please, someone strike me with a hammer.

We drove back home just about immediately after the race (take advantage of when the little one is asleep, folks), stopping at a Panera for lunch. When we got home, I just about guzzled a serving or seven of Infinit’s Mud. Thankfully, the sock and shoe combo kept my feet in top condition, even though the rest of me was not.

Alright, so what’d you learn?

Well, I probably should’ve stayed with Mr. QT2 (he passed me in my death march of mile 12). He seemed to execute much better than I did.

I also just simply failed to do what I had planned to do. No amount of coaching can help if you, as an athlete, don’t execute. I ran like a moron, and got the result I deserved for it. I probably would have had a stronger end result had I actually, you know, eaten my nutrition, too. But we’ll be revisiting that back to what worked well for me in Charleston in 2014.

Next up – Wrightsville Beach Half-Marathon in March. Flat and fast. Perhaps this time I won’t race like Icarus. Because proper prior planning will prevent piss-poor performance.