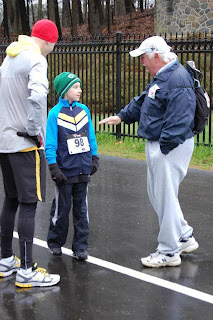 This past weekend was the 6th annual Greater Hartford Quarter Marathon. In a lot of ways this race is my baby. While its not the first race I founded and was race director of (that honor belongs to the Solstice Sprint 5K), its the one I’ve worked on the most. I always find it amusing when people refer to the race committee or race organization or make comments like “at least your getting paid” to be out in the cold, wet weather when, in reality, the race is pretty much me. Don’t get me wrong, I’m extremely lucky to work with fantastic volunteers (without whom the race would not be possible) but the planning, organization, administration, logistics, purchasing, registration, baking and volunteer recruitment are pretty much me. I do this because I love it (and I’m not paid to do it) and because I think it is important to raise funds and awareness for and on behalf of the Blazeman Foundation. The 2012 edition of the race was particularly special for three reasons — first it was the most miserable day possible to run, second we had Robert Blais (B-Dad!) as special guest on race day and third (and most importantly) the 2012 edition of the race raised almost $6,000 for the Blazeman Foundation, which brings the total donation from the Quarter Marathon to over $20,000. 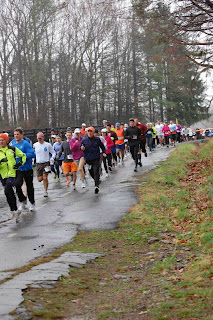 The two weeks leading up to race day were gorgeous. Unseasonably warm temperatures and lots of sunshine. The weather in Connecticut was more May than March and initially there was a promising forecast for race day — low 60s and sunny.   By the Thursday before the race the forecast had changed considerably instead of sunshine and 60s, the prediction was rain and snow with temperatures in the low to mid 30s.  The weather was beautiful for early packet pick up on Friday afternoon, the only problem was when we unpacked the boxes of race shirts, we discovered that we were missing about 120 shirts (mostly in women’s sizes).  After several frantic calls to the shirt vendor, the vendor discovered that a large pile of our shirts had been left on the factory floor.  The misplaced shirts were shipped out today and I’ll be sending them to all the runners who ordered women’s smalls and mediums later this week. 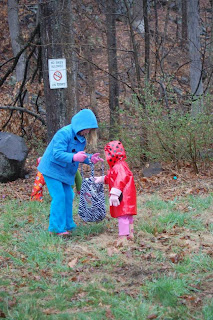 When we woke up at 5 a.m. on Saturday morning, we were greeted with sleet and rain.  While we tried to stay dry while unpacking and setting up all of the equipment, it was pretty much impossible to do so.  By 8 a.m. it seemed like it was even colder and wetter than it was when we arrived at the MDC.  I was convinced that no one would show up to race but of the 550 pre-registered runners almost 400 showed up on race morning. Before the race started runners and volunteers alike were huddled under the tents trying to stay warm and dry.  By 10 a.m. (the scheduled race start time) the rain had tapered off a bit and the snow had stopped.  While the conditions were still miserable, at least they were better than they had been a few hours earlier.  At the start B-Dad said a few words about the Blazeman Foundation and then the runners were off. 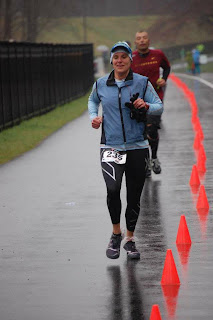 While I took pictures of race start and tried to get a good shot of each of the runners as they passed through the halfway point and then the finish line, Emily and Sarah set up an egg hunt for all the little spectators.  While there weren’t a ton of kids, its always fun to watch then scour for eggs.  The weather stayed pretty nasty (as is evidenced by the pictures) throughout the run.  While there never was a down pour, it was generally miserable for the entire race.  The only good thing about the weather, is that it made for some really nice pictures of the runners.   My hands completely froze trying to take pictures, so I can only imagine how cold it was for the runners.  While the weather was nasty, there were some quick runners out there.  Brett Stoeffler took the men’s title in a time of 38:49 and Megan Jaswell (wearing the best hot pink outfit ever) took the women’s title in 42:37. 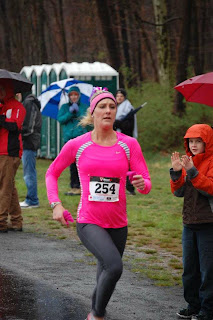 Post-race festivities were a bit shorter this year than most years because of the weather. While there was still tons of food (I am a firm believer that there should be massive quantities of sugar at every race finish line — especially frosted baked goods), the cold, wet weather sent lots of people home early.   I know the weather was miserable and the race could have been a bit of a disaster but because of the great volunteers and runners, it was a really nice event.  I especially want to thank all the volunteers who came out and braved the nasty weather including: Shaun Gallagher who did a ton of manual labor for the event including attaching the B-tags onto the bibs, labeling all the bib numbers and making repeated Costco and Target runs for last minute supplies; Emily Gianquinto, who does a masterful job with registration every year; Maureen Burns, my mom, who is the best (and baked like a trooper for the race); David Reik, who marks the course every year; and Peter Hawley, who has put up with my nonsense for the past seven years; Erica Shotts, who provided me with three fantastic finish line supervisors; and Claudia Arguello, who got up at 5 a.m. to help me set up in the rain. 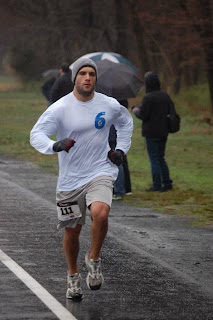